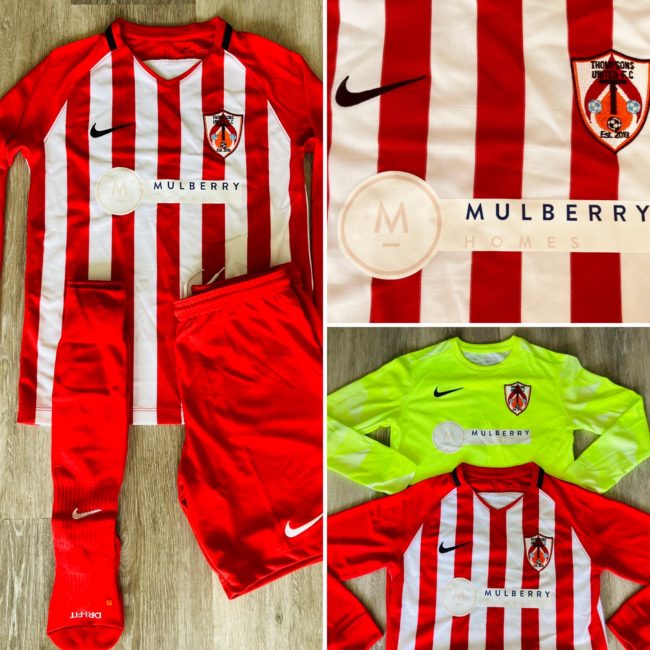 A junior football club in Lutterworth has been sponsored for the upcoming season as part of the company’s Distinctly Local programme.

Thompsons United FC was newly formed last year and trains at Ullesthorpe playing fields, which is nearby our Kingsbury Park development in the town.

The club relies upon sponsorship from local businesses to keep it running, with each team having its own sponsor. We have sponsored the U7s Flames team £620, which has been purchased new kit for the players and also contributed towards new goal posts.

Kerry Jones, Sales Director at Mulberry Homes, said: “Distinctly Local aims to help as may local community groups and organisations as possible and we’re thrilled to be able to sponsor Thompsons United FC with this campaign.”

Sarah-Anne Thompson, Club Secretary and Welfare Officer said: “My husband set up Thompsons United FC, with fantastic support from his volunteer coaches, as a community-based club with the purpose of our players being active, enjoying themselves and making friends.

“This year we had numerous fundraising activities planned, such as a sponsored walk, to help raise funds for the club but due to the ongoing pandemic they’ve obviously had to be cancelled. We’re extremely grateful to Mulberry Homes for their sponsorship during these uncertain times.”

Matt Thompson, who coaches the players, added: “It’s thanks to community-focused businesses like Mulberry Homes that we’re able to do what we do and create a fun environment for children to come together and play football.”

Thompsons United FC currently has a soccer school (for children aged four to six years), two U7s teams, an U8s team and an U11s team, but also trains with children in all age groups up to 11.

Mulberry Homes’ Distinctly Local campaign aims to support two local charities or organisations every month. The programme has continued throughout the Coronavirus pandemic focusing on good causes that can really make a difference to communities coping with the ‘new normal’.

View Open
We’re thrilled to be supporting the @greensandco