DOUBLE MARATHON SUCCESS IN THE SAHARA FOR NORTHAMPTON CHARITY RUNNER 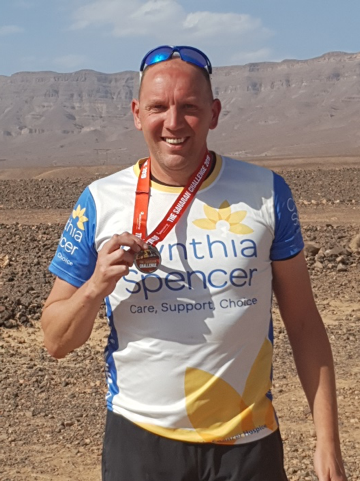 A Senior Quantity Surveyor for Creaton-based developer Mulberry Homes is getting his breath back after successfully completing a two-day double marathon and raising over £5,000 for local charity Cynthia Spencer Hospice in the process.

Darren’s participation has raised just over £5,000 in sponsorship, including £1,000 from Mulberry Homes. The funds will go towards Cynthia Spencer Hospice’s services, including wellbeing, inpatient and home care.

Darren said: “This is a charity close to my heart as two of my relatives have been cared for at the Hospice. I’m extremely grateful to everyone who has donated so generously, and Mulberry Homes’ contribution means a great deal to me.”

The group flew into Marrakech and drove for eight hours through the Atlas Mountains before reaching their camp, where they slept in tents for three nights. Temperatures reached 32˚C on the first day and 37˚C on the second, but this wasn’t enough to faze Darren, who finished in 14th place with a six-hour run on day one and 9th place in seven hours the day after.

“I’ve completed a few 100km runs with Action Challenge before,” Darren explained, “but none in the desert! Running on sand was a challenge, especially as one of my running shoes actually melted!

“It was an excellent experience and I’d definitely do it again, although next year I’ll be busy attempting four marathons in four days in Devon.”

Ian Sadler, Managing Director of Mulberry Homes, commented: “Completing two marathons in 48 hours under gruelling conditions is a remarkable achievement, and we are all very proud of Darren for making such a success of the challenge. It is a pleasure and a privilege for us to have made this donation to Darren’s chosen charity, Cynthia Spencer Hospice, who make a truly valuable contribution to the community.

“On behalf of everyone at Mulberry Homes, I would like to congratulate Darren again and wish him the very best with any future challenges he decides to take on.”

Established in 2011 and based in Northamptonshire, Mulberry Homes is a medium housebuilder that provides quality properties across the wider Midlands. It specialises in individual and small developments with their own looks and personalities and builds traditional homes with modern layouts.

View Open
Our #socialmedia #competition with the @greensandc

View Open
Buying Off Plan can be daunting, but there are a l

View Open
Don't forget about our exclusive preview event for

View Open
Have you entered our #socialmedia #competition wit